The statue of the Virgin and its rescue

The altar and the statue

OF OUR LADY OF VICTORIES

It was placed in 1809 and crowned, at the request of Pope Pius IX on July 9, 1853, in thanksgiving for the deliverance of Rome by French soldiers in 1849. It was the first Virgin crowned in France by a Pope.

Under the altar rests a copper shrine containing the relics of Saint Aurelia, a young Roman martyr from the third century.

Victim of the persecution of Valerian, she was buried in the catacombs of Saint Priscilla in Rome. Her body was transferred to Our Lady of Victories by Pope Gregory XVI in 1843. 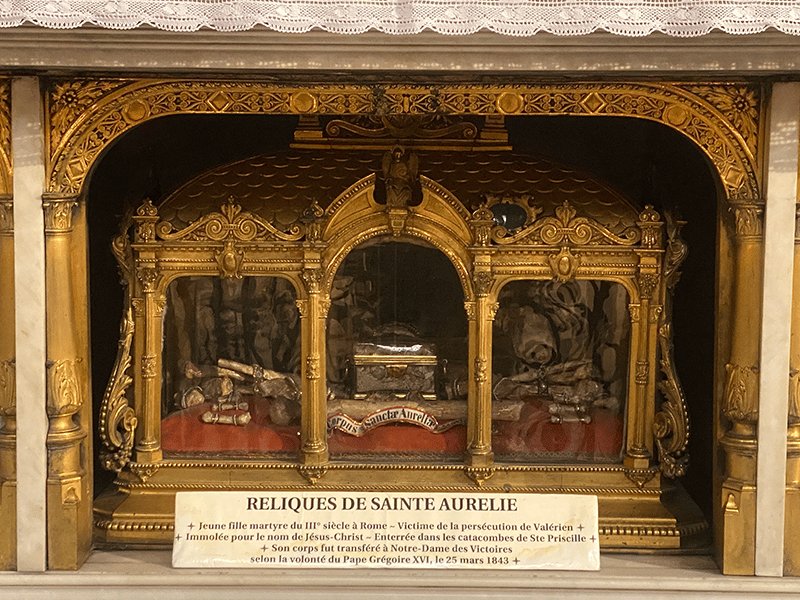 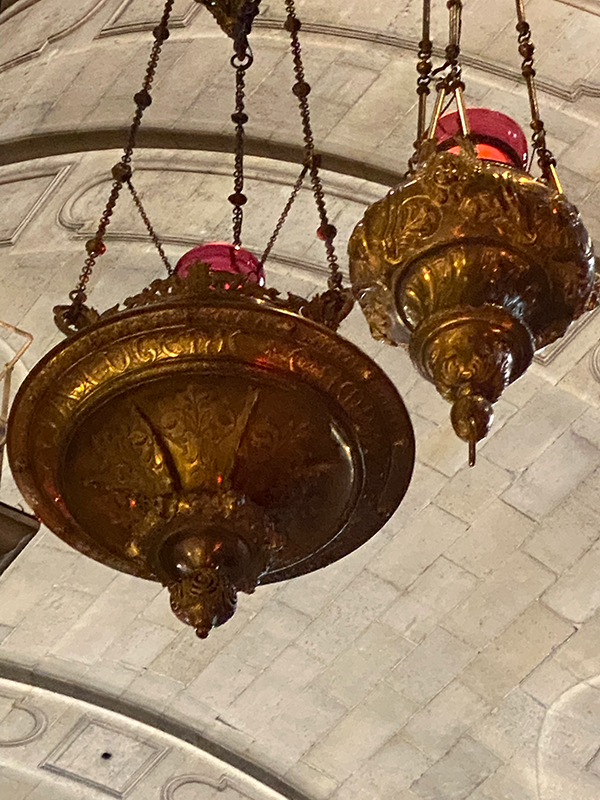 The lamps above the altar are ex-votos. The largest, in the center, was given by the Empress Eugenie in 1866.

« Our Lady of Victories. Ah! what I felt at her feet, I could not say it… The graces she granted me moved me so deeply that my tears alone expressed my happiness » 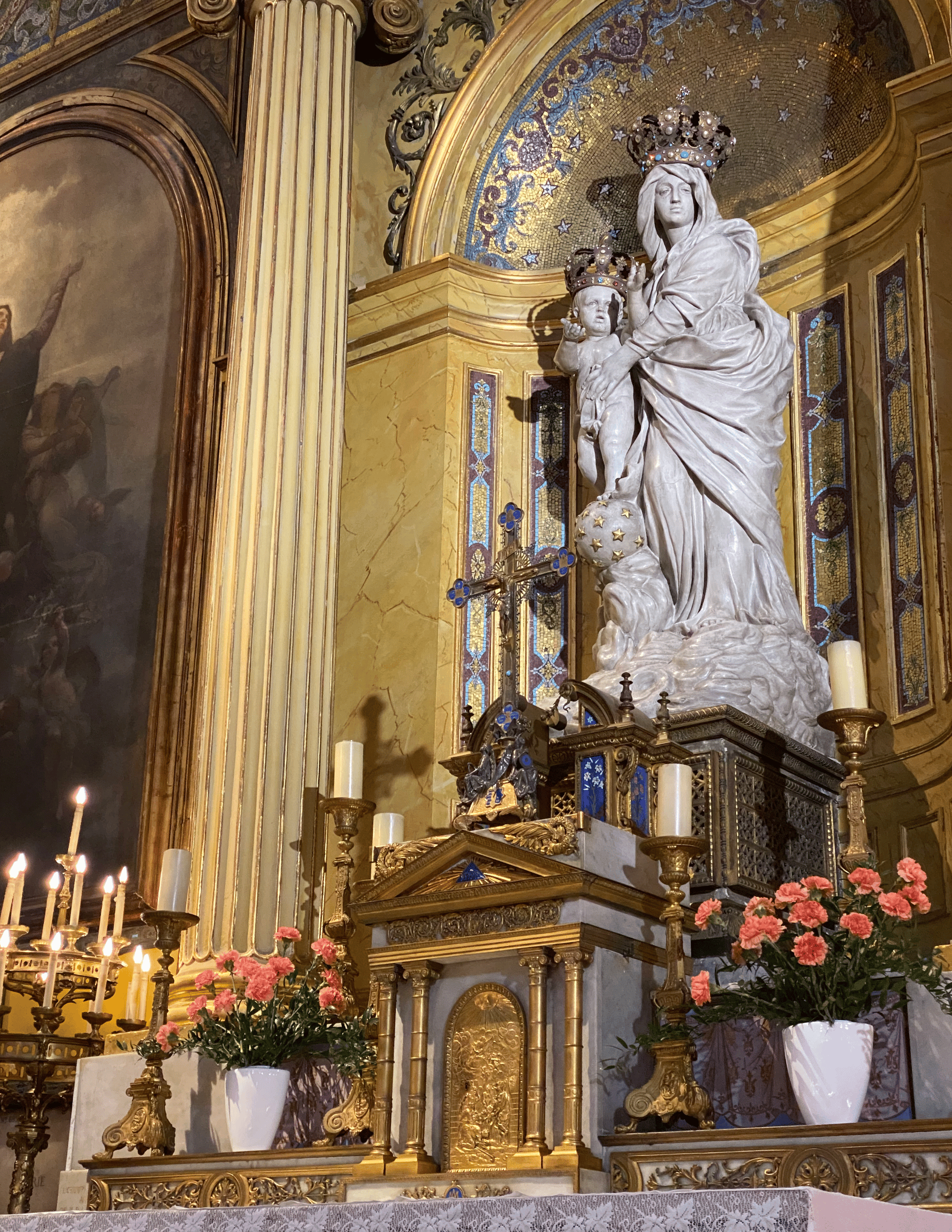 The statue was saved in extremis during the sacking of the church during the Commune.

On May 17, at 4:45 p.m., the day before the feast of the Ascension, a battalion of Fédérés entered the church; it was total chaos.

The Federals chased the faithful and tried to expel them. The parishioners then gathered at the feet of the statue of the Virgin to protect it, making a rampart with their bodies at the risk of their lives. The statue is really threatened, the Federated want to break it.

A priest intervenes, kneels at the feet of Our Lady of Victories and tells them:

« You see this statue, it is venerated by the whole world! I’m not leaving here until you promise me to respect it and not break it. »

He is immediately taken to prison.

Witness to the scene, James Libman steps forward. Jewish by birth, he had converted to Catholicism.

They wanted to take him prisoner. He looks at them coldly and says:

« At your ease. I will only ask you to respect the statue of the Virgin. It is mine; it was given to me this very morning by citizen Fontaine, director of the estate. »

Which was absolutely wrong. But this bluff works.

The Federals retreat, the statue is saved.

An ex-voto was revived in 2021, on the 150th anniversary of the rescue of the Our Lady of Victories statue.

« Grateful to Mary who allowed me to save her venerated statue at Our Lady of Victories on May the 17th, 1871.
J. LIBMAN »

This ex-voto was requested by James Libman and placed well after the tragic events to which it refers, in 1903.

It was originally located in the present chapel of the holy couple Louis and Zélie Martin and was installed at the feet of the statue saved in May 2021. 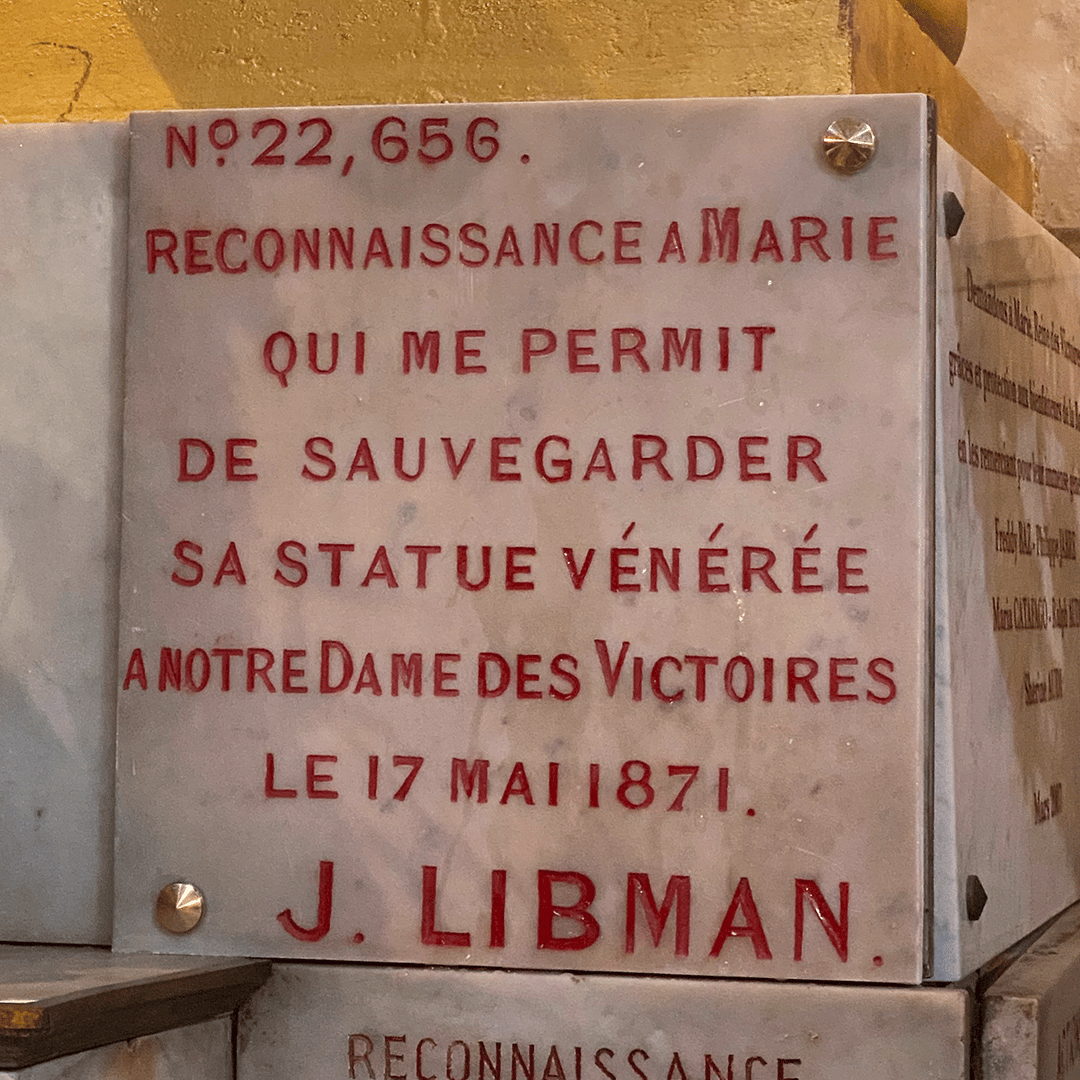