The paintings of the life of Saint Augustine

A UNIQUE COLLECTION IN FRANCE

This collection of paintings is the most important in the capital, as much by the talent of the artist as by the number and size of the canvases: up to 5 m long and 3.3 m high!

« Happiness is to continue to desire what you have. »
St. Augustine

Because he was the saint patron of the order of monks who occupied this church. He has a chapel dedicated to him, opposite the altar of the Virgin.

These 6 pictures were painted by Carle Van Loo (1705-1765) between 1753 and 1755 at the request of King Louis XV in thanksgiving for the benefits obtained by his ancestors and himself through the intercession of Our Lady of Victories.

1. The Baptism of Saint Augustine

Saint Augustine was baptized on Easter eve 387, at the age of 32, with his son Adeodatus and a friend, Alypus.

The saint is depicted wearing the white robe of the catechumens. He holds a candle in his hand and bows his head over the baptismal font. Standing before him, the archbishop of Milan, Saint Ambrose, pours the water over his head. Adeodatus is at his side in the same costume and attitude as his father. Alypus is kneeling behind them.

Around them are Saint Monica, Augustine’s mother, Navigius, his brother, and disciples. 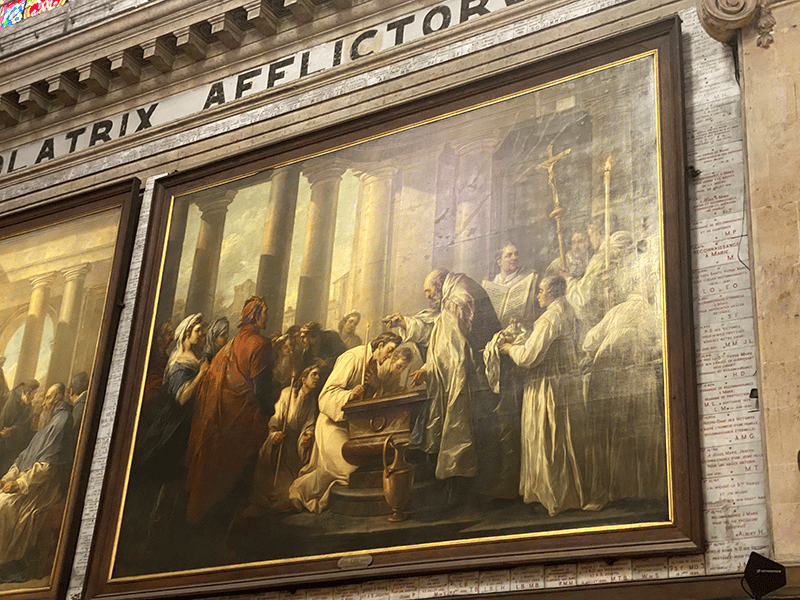 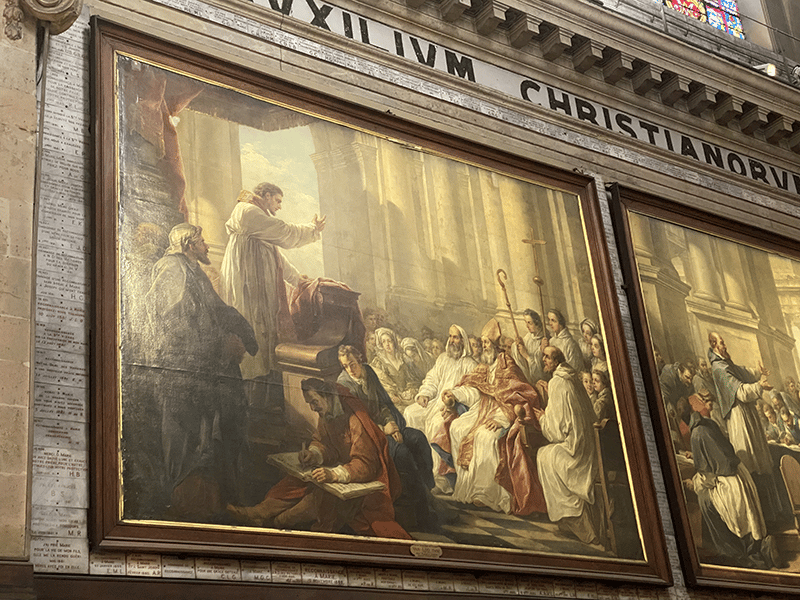 Saint Augustine having been ordained a priest, the bishop of Hippo (Algeria) attached him to his Church.

The Latin language was then in use in Hippo, which was under Roman domination. Valerius, Greek by birth, spoke this language with great difficulty. Knowing Augustine’s talent for oratory, he had him replace him in the ministry of the Word. This was the first time in the Western Church that a priest was asked to preach before a bishop.

Augustine gave his first speech on the occasion of Easter 391. Valerius, at the head of his clergy, is seated before Augustine who is preaching from a platform. The old bishop listens with satisfaction and admiration to the young priest.

At the foot of the platform, a scribe is collecting Augustine’s words.

Valerius, who was very old, feared that Augustine would be taken away from him and that another Church would ask him to be bishop. He therefore wished to appoint him as an auxiliary bishop at his side.

Despite the approval of the bishops and the people, Augustine at first opposed this plan, but finally yielded to the Will of God.

He was consecrated in December 395 at the age of 42. In his painting, Van Loo chose the most solemn moment of the episcopal consecration: the moment when the bishops present him to the consecrating bishop. 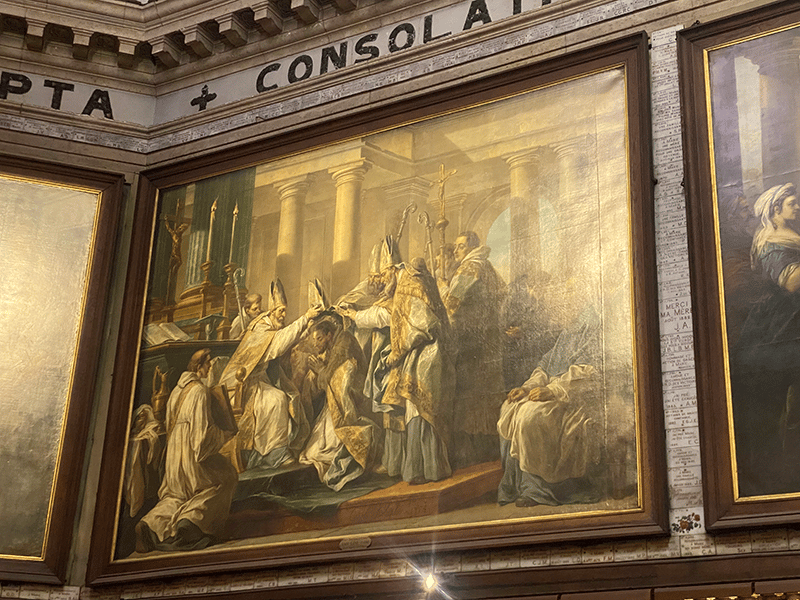 Donatus, bishop of Carthage, was the instigator of a schism that troubled Africa for more than a century. In order to put an end to this deep-seated evil, the emperor Onorius asked for a conference to be held between the Catholic and Donatist bishops.

In 411, 280 Catholic bishops and 279 Donatist bishops met in Carthage. Seven bishops were chosen from each side to discuss the points that the Donatists refused to admit. Augustine was elected first among the Catholics.

At the end of these exchanges, the Catholics were declared right. This success was partly due to Augustine: he stood out among all the other bishops by the science and wisdom of his answers as well as his eloquence.

Van Loo was able to highlight the bishop of Hippo who has the main part in this conference. The saint exposes with nobility his opinion. Despite the violent gesture of his interlocutor, the latter feels that he is defeated by Augustine’s luminous argumentation.

The figures are depicted standing because, according to the account of the conference, the Donatist bishops refused to sit down.

Saint Augustine is on his deathbed, healing a sick person brought to him.

The calm and recollection of the saint, his hand that he painfully supports to bless the sick person presented to him, the expression of confidence and gratitude of this person, the amazement of those who carry him, make this a moving picture.

Saint Augustine is lying down and all around the room there are sentences written on the walls. The history of the Church reports that Saint Augustine fell ill during the third month of the siege of Hippo by the Vandals, and that he could only think of preparing himself for death.

He had the seven psalms of penance written on the walls of his room to read from his bed and he did not read them without shedding tears. 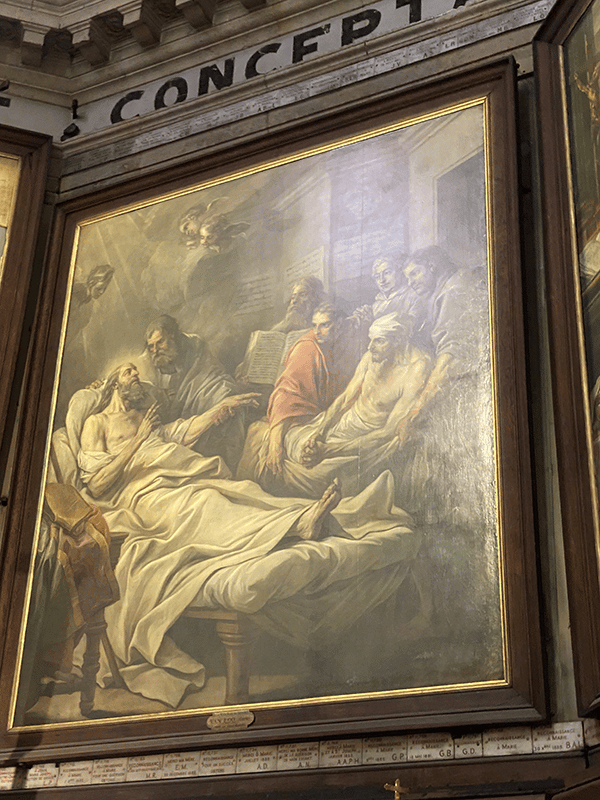 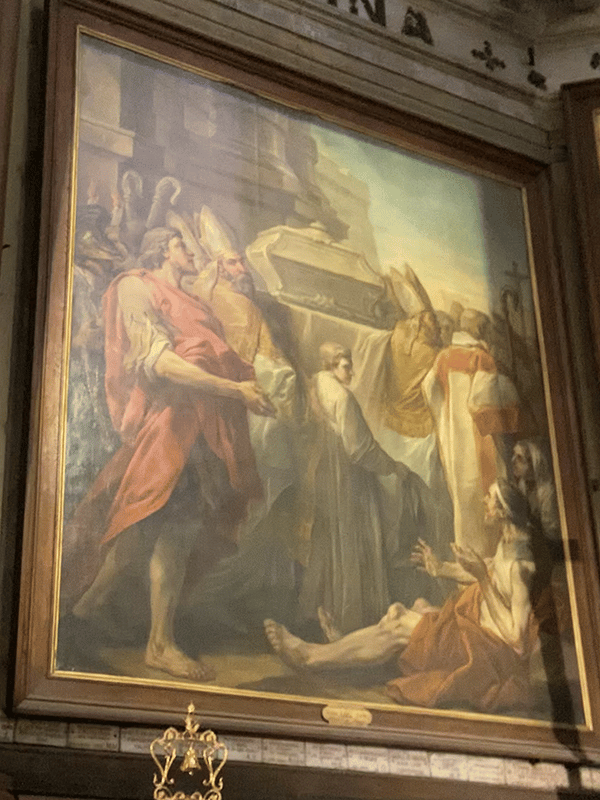 6. The translation of the relics of Saint Augustine to Pavia (Italy) in 722

Saint Augustine is buried in Hippo in the church of Saint Stephen.

During the 5th century, the king of the Vandals condemned several bishops to exile. They then withdrew to Sardinia (Italy), taking with them the relics of Saint Augustine.

In the 8th century, the king of the Lombards bought these relics for a considerable sum. As soon as he knew that they had arrived in Pavia, he went to that city. Lords, bishops, priests and a large crowd accompanied him.

After kneeling in front of the shrine, he left all marks of royalty and followed the relics, with uncovered head and bare feet, that the bishops carried on their shoulders to the cathedral of Pavia.

Next to the king stands a page holding his scepter and diadem.

The history of the Church adds that during the translation, several sick people who were made to touch the relics were cured. The painter did not forget this detail: in the lower corner of the painting, we see a cripple who contemplates the shrine with hope and begins to feel the effects of this holy vicinity.