A quick look around

There are many stained glass windows in the basilica! And it is sometimes difficult to understand them. Here are some keys to decode them. 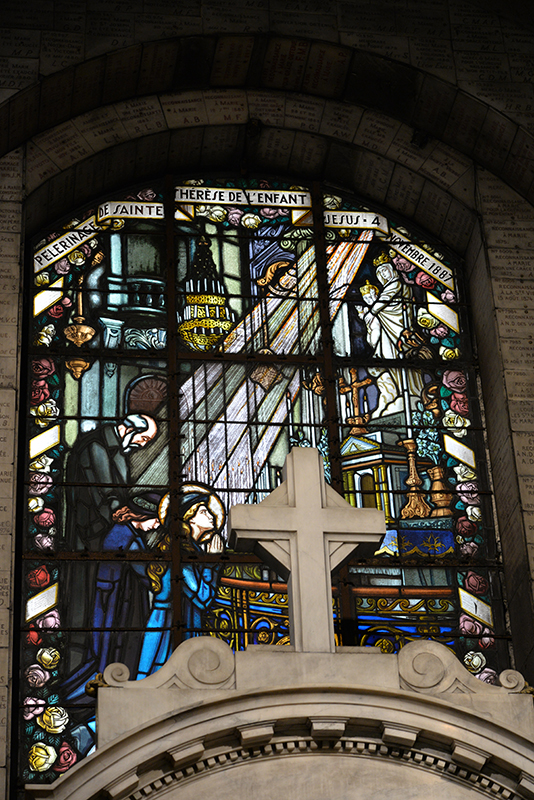 But if you look up, you will see the saints who are patrons of the side chapels.

There are two chapels with stained glass windows:

« The genius of stained glass ends when the smile begins. »

As you continue up the nave, you may be spontaneously drawn to the altar of the Virgin.

Above the statue, there is a stained glass window that summarizes the beautiful mission of the archconfraternity founded by Father Desgenettes in 1836: to invoke the Virgin for the conversion of sinners.

This stained glass window was executed in 1854 and was offered to Father Desgenettes by the members of the archconfraternity.

In the middle of the window, the Virgin Mary appears in a dazzling light. Above her head, groups of angels sing her praises.

Around her stand, some in the attitude of repentance, others in the exaltation of their soul, converted sinners. Among them is a young man in prostration, next to whom stands a woman in prayer whose head is surrounded by laurels, the symbol of the saints. It is St. Augustine, still a sinner, whom his mother, St. Monica, presents to Mary.

At the feet of the Virgin, a banner bears these words: « Mary, refuge of sinners ». This is the cry that seems to escape from the mouths of all these happy converts.

In the lower left corner, an angel covered in bronze armor pierces with a spear the devil who would like to hinder Mary’s mercy toward sinners. At the very bottom of the window, another angel presents Father Desgenettes with the statutes of the archconfraternity. 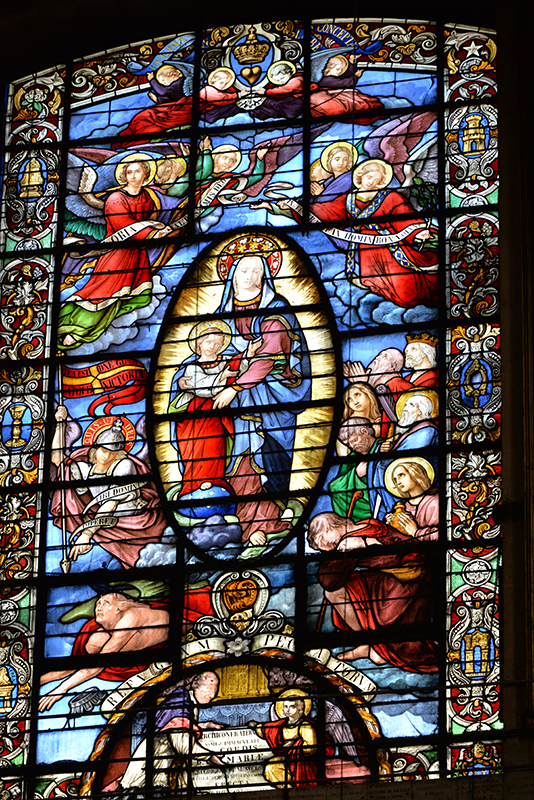 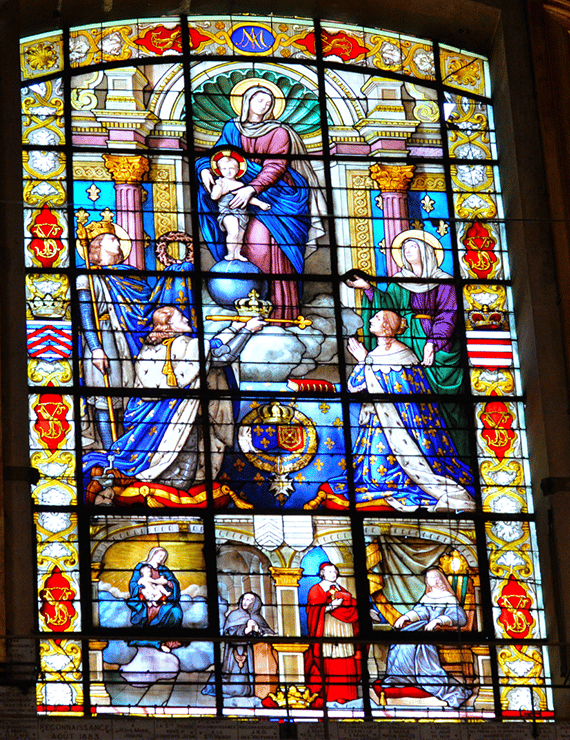 Opposite is the chapel of Saint Augustine. Above the statue of the saint, you can contemplate a beautiful stained glass window divided into 3 panels, the work of Claudius Lavergne, a student of the painter Ingres.

The upper panel represents Louis XIII consecrating France to Mary. The Virgin is on a sort of throne, in a pose quite similar to that of the statue of Our Lady of Victories. The child Jesus is next to his Mother, carried by clouds.

The king, kneeling, presents Mary with his scepter and crown. Next to him is his royal ancestor St. Louis, on whose mantle the lilies also shine brightly. Anne of Austria, the wife of Louis XIII, kneels like her husband. Her patron saint, Saint Anne, is standing beside her.

At the bottom left, a religious man praying in his cell sees the Holy Virgin appear. She is holding a small child in her arms. This religious is Brother Fiacre. The child Mary presents to him is the young dauphin, the future Louis XIV, whom she announces she will give to France.

On the right is Queen Anne of Austria accompanied by Cardinal de la Rochefoucauld, her chaplain, who has heard the news of the grace of the Marian apparition to Brother Fiacre and has come to congratulate the queen.

As you enter the basilica, your eyes are drawn to the stained glass window at the back of the choir, which depicts Christ on the Cross.

It is located above the Marian inscription: « Regina sine labe » which means: « Queen conceived without sin ».

This stained glass window was also executed by Claudius Lavergne.

Looking at the window, we can see Jesus crucified. On either side of the Cross, the Virgin Mary and St. John sympathize with the pain of Christ.

Next to the disciple, a young woman kneels in fervent prayer. A coat lined with ermine is thrown over her shoulders. It is the Duchess Yolande de la Rochefoucauld, praying for her husband’s recovery.

Above the group, an angel, wings spread, holds a small child in his arms.

Around the painting, in the middle of arabesques that form the frame of the stained glass window, one can distinguish the coats of arms surmounted by crowns and the letters S and Y intertwined, which means: Sosthène and Yolande de la Rochefoucauld, thanks to whose donation this stained glass window could be financed. 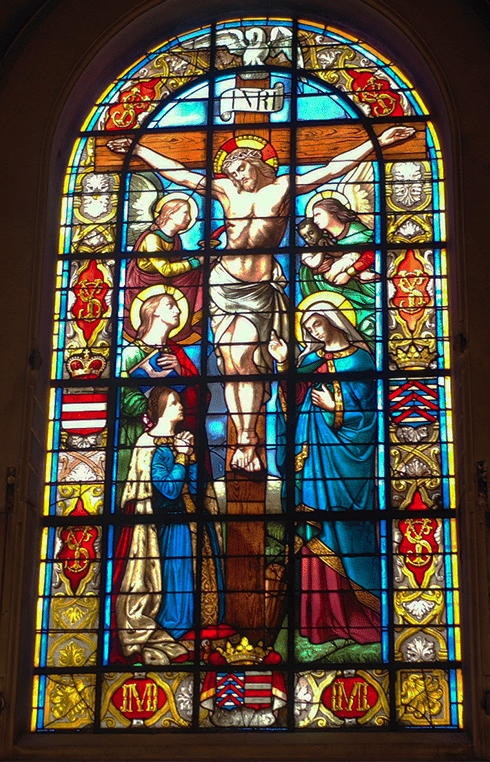